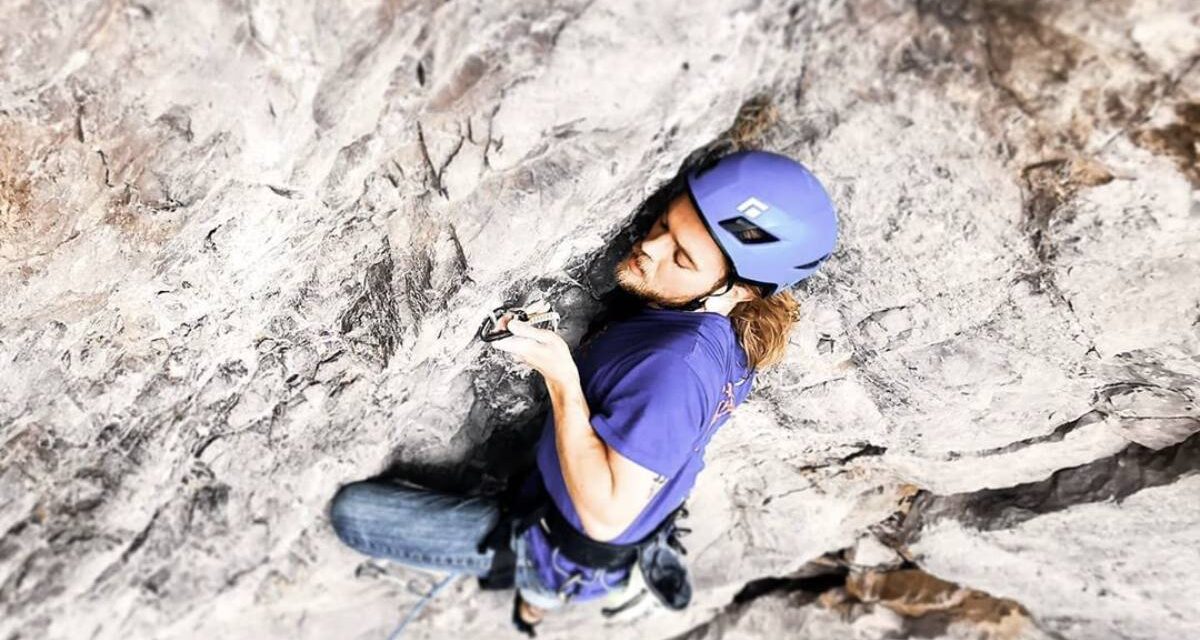 I’m Scott Heleniak and have worked at City Bloc for a few years now. I originally started by creating content for them through video & graphic design. Next thing, I’m a part of the squad, doing bits of coaching and keeping the cogs turning at the desk greeting all the lovely climbers.

Who took you for your first climb?

While we were at University in Bournemouth, Me and my 2 friends; Charlie and Hal, took ourselves to a nearby climbing wall in a school gym which had loads of lead and top rope walls rising up to the roof at one end of the gym. We did a short 4-week course on how to belay and climb. Our instructor was called John, but we called him Johnboy. After that, we kept climbing on the ropes and after a while we branched out to The Project Climbing gym in Poole, Dorset

Do you remember what it felt like to be a beginner?  Were you a natural from the start?

I remember feeling like there was so much to know and learn, especially with the safety aspects. But, like with anything the more we practiced, it just became second nature pretty quickly. I remember thinking I would be a natural, but quite quickly learned I knew nothing about this sport and picked Johnboy’s mind about different techniques. I think that skateboarding and doing parkour from a young age helped as I was familiar with balancing my centre of gravity.

When and how did your skills start improving?

While I was climbing down south, I had no close friends who had lots of experience in climbing so I wasn’t progressing with it much, loving it nonetheless. When I came up North again, I got myself a job at the Ellis Brigham climbing wall that used to exist in Xscape, Glasshoughton and was suddenly surrounded by climbers and could climb whenever I wanted. So, thanks to the guys working there, I started improving my rope skills, climbing ability and actually started getting outside way more often. One person I definitely have to thank is Lee Redfern; who has become one of my closest friends, my climbing partner who I have been lucky to go on many climbing trips with and just generally a huge influence for bringing me so much knowledge and experience.

At what point did you realise you were addicted to climbing?

I think the moment you become addicted to climbing is when you’re unbelievably psyched from a day out or a gym session and you have allowed yourself to get shut down by a climb. You then find yourself laid in bed that night, going through the moves thinking about how you could make it easier and how not to fall off.  Then, you wake up and you’re still thinking about it and are looking at your diary figuring out when you’re free to get out climbing again so you can go back and try and get it. Besides that, when you start prioritising your spending on essential climbing gear instead of things that don’t benefit your climbing  is a sign that you’ve become a climbing addict. Healthiest addiction I’ve ever had that’s for sure.

What do you do to train now?

When possible I am very frequently down at City Bloc hanging out with friends, pushing it on problems, doing 4×4 and using the calisthenics area. Climbing is full-bodied so anything I can do to keep the flexibility (yoga), mobility, power and strength high is helpful. I prefer to feel strong and light, so I keep my diet as stodge-free as I can while going running often. My main focus at the moment though due to the lockdown is finger-strength on the fingerboard and kettlebell/dumbbell work with a focus on endurance.

What is your favourite thing about climbing?

The community is amazing, it’s filled with people who are switched on to a healthy lifestyle and take care of themselves while having fun doing so. I’ve made so many great friends and had some of the greatest experiences since getting properly into it. It allows me to switch off from work and everything else going on in life and have space to be silly and have a laugh. The past 3 years, i’ve been making an effort to travel more to good climbing spots. It makes more sense to me to travel somewhere beautiful to climb on rocks than it does to go on a trip and not climb on rocks. Some of the most stunning places I’ve ever seen were brought to my eyes because we specifically went there looking for the climbing.

Who is your climbing guru?

When you say guru, that makes me think of a guru I met in a hostel in Kahtmandu and he always ensured that your mind was at ease. So, if I were to relate this to climbing I would have to say that is the Bloc-Legend; Malcolm Haslam. He always reminds us that enjoying climbing is the most important factor, then it’s climbing hard! Malcolm always lifts everyone around him to feel the love and positivity climbing brings to us. I will have to paraphrase this one, but I once remember him telling me about a climb he did which was “really chossy, the rock just snapped off in your hands, you know, proper dangerous, like really scary stuff… it’s brilliant.” That kind of attitude has stuck with me and probably always will.

Warm-up properly before any session because getting injured just stops you from doing what you love. Making sure you’re not doing silly moves on really small holds if you’re not used to doing them with control and decent technique, you’re just asking for busted fingers. I can’t express how important not-getting-injured is, obviously sometimes it just can’t be helped because accidents do happen, but injuries can definitely be avoided, so take some time to understand how to avoid them! My mantra is, “you are neither above or below anybody” – we’re all here to progress at our own level, leave your ego at the door and enjoy this beautiful sport!